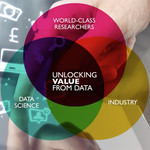 This summer, I was asked to support the Scotland CAN DO Innovation Forum with some data visualisation work. The Forum has been working with its members, representing key employment sectors in Scotland, to better understand innovation. What does innovation look like? How does it manifest in different sectors? And how can we support innovation across Scotland?

To begin answering these questions, the Forum conceived of an “Innovation Snapshot”. The aim was to design a single set of questions that could be asked of sectors in Scotland that would provide a relatively consistent dataset about innovation in each sector. In practice, this was a word document which included two sets of questions, one set to provide broad context for the sector and which came from Government economic data, and one set to provide sector-specific information. When the Data Lab joined the team, four sector representatives had been at work collating the relevant information, and my job was to draw out the similarities and differences across the sectors.

Three infographics were presented to the forum on September 25th 2018, and these can be accessed at:
* Fintech
* Renewable Energy
* Sustainable Tourism
These are live documents, and have now been handed over to the client for further development. In this blog post I'm going to talk a little about the process of creating these, the approach I took and how I managed this data visualisation project with a tight deadline.

The initial brief suggested that five reports should be produced, one per sector and one looking at a cross-sectoral analysis, and that these should be presented to the Forum at its next meeting at the end of September. Not only was this a tight timescale, but experience suggests that very few people have the patience to read a linked set of five reports! Instead, I proposed that we produce an infographic covering each sector – a format which would present much the same information as the report, but which would be much more flexible and could be later used by the sector as a communication tool in other contexts.

How does one manage such a data visualisation project, with five stakeholder parties, a dataset which is not programmatically accessible, and a tight deadline? In practice, I had three stages.

The first stage was to process the sector data, draw out the key points for each sector, and present them in a first draft of the infographic. The first draft infographics were very standardised, with a five-page approach covering sector context; broad innovation approach; opportunities, challenges and barriers; and skills. This was sent out to the sector leads and they were given some time to go through the draft, while I worked on the cross-sectoral report.

In the second stage, I met personally with each sector lead. I talked them through the current approach, helped them articulate their key message, and together we identified what had to change in the first draft. From these meetings, the second drafts were developed. Because there had been a lot of consistency at the first draft stage, much of this underlying structure remained in the second stage, but each sector was able to customise the approach to help draw out the most representative picture of innovation in that sector.

The Forum itself met at the end of September, and three infographics were presented to the Forum members and the attending ministers. I was asked to provide a summary of learnings to the Forum, something which was done without slides – less through planning and more because edits to the infographics took me right up to the wire and left no time for developing my own slides! I talked about the challenges of working with standardised economic data sectors which did not represent the key sectors we were talking about, and commented on the very different approaches to innovation seen in each sector and how those differences emerged from the challenges the sector faced.

The third, and final, stage for the project was after the Forum when the time pressure was reduced. In this stage, I revisited the report to apply the changes the Scottish Government had requested. I also met with the client to discuss what the learnings were, and to suggest a route forward for the next snapshot.

Data visualisation projects are generally less technical than machine learning projects, but they are also challenging. The information has to be engaging, well-chosen and the whole presentation has to tie together to create an overall message that even a non-technical audience can access. In a machine learning project, a data scientist can spend much of their time on data processing and coding; in data visualisation, much more time must be spent working with the client. The data itself will hold many potential stories, but it’s the client who can draw out the particular stories that will resonate. In this context, delivering an infographic was a good choice – it can display the data but can also tell the story. I used Infogram, as software which focuses on data-driven visualisations. Its strength was that most of what I wanted to do was simple; its weakness was that anything that wasn’t simple was entirely impossible.

Feedback from this project has so far been very positive. People liked the approach of using infographics in this way, and saw real value in being able to cross-compare between the sectors in a consistent manner. Infographics are now very standard technology which can be easily created through many different tools. They offer some benefits over a powerpoint presentation – they’re interactive, easily embeddable, transferable technology that can be centrally updated and that offer dedicated tools to visualise data. In this case, infographics were a good choice.